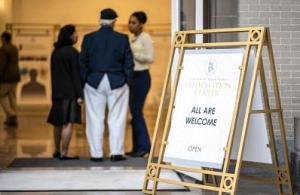 I think a lot of people are curious about the Flag Building and I think this presentation really ‘nails it.’”
— Visitor to the Scientology Information Center

CLEARWATER, FL, USA, April 11, 2019 /EINPresswire.com/ — Following the April 8th Season 3 Launch of Scientology Network TV, the Scientology Information Center in downtown Clearwater is hosting on-demand showings of the new TV episodes, as well as the “Inside Scientology: Flag” special allowing the Tampa Bay community to learn about the Church of Scientology Flag Service Organization and see inside its facilities.

“Since its opening in November 2013, the 377,000 square-foot Flag Building – the Church of Scientology’s spiritual headquarters in Downtown Clearwater – has elicited unprecedented interest and curiosity from the local community and tourists visiting Clearwater,” said Amber Skjelset, the Manager of the Scientology Information Center.

This breathtaking structure stands seven stories tall, with its 22-foot Scientology sunburst cross rising 175 feet above it all. It occupies an entire city block and can be seen from many directions miles away.

The unique Scientology TV episode presents the Flag Building and the adjacent Fort Harrison religious retreat in a one-hour presentation providing a visual tour of the building, an intimate look at the history and significance of the spiritual headquarters and its presence in the community.

One visitor who saw the “Flag” episode said, “Honestly, I didn’t have a clue about what Scientology is and how long it’s been here in Clearwater. What I enjoyed most about the video is that it showed so many aspects of the spectacular facility and answered my questions. I think a lot of people are curious about the Flag Building and I think this presentation really ‘nails it.’”

Visitors can attend the showing individually or bring family or friends. Additionally, any other show on the Scientology TV Network can be played on-request at the Scientology Information Center. The Center is open daily from 10am-10pm. No appointment is required.

For more information about the Center please contact Amber at 727-467-6966 or amber@cos.flag.org.

The Scientology Information Center, located in the Historic Clearwater Building in downtown Clearwater, opened on July 11, 2015, and currently houses a gallery of audiovisual displays with some 400 videos. The Center is open to all and provides a self-guided tour showing basic Scientology beliefs, Churches around the world, ongoing social programs and the life of L. Ron Hubbard, Scientology's founder. The Center offers tours to the broad public and civic leaders; holds concerts, theatrical performances and receptions for the community; and opens up the use of its conference room to social, civic and non-profit groups.