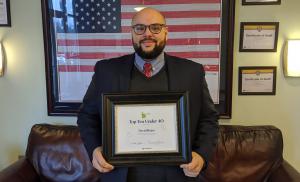 The Lancaster Chamber of Commerce recognized PCI Group’s David Rojas with its “Top Professionals Under 40” award at its 64th annual banquet.

we are very proud of David and what he has accomplished. As a key member of our management team, we are thankful for his hard work and dedication to improve our business.”
— Christian Kropac, Jr.

FORT MILL, SC, USA, February 12, 2020 /EINPresswire.com/ — The Lancaster Chamber of Commerce recognized PCI Group’s David Rojas with its “Top Professionals Under 40” award at its 64th annual banquet on Thursday, January 30th. A record 294 people attended this year’s ceremony with the Chamber debuting this new award category, recognizing individuals who have excelled in their fields, sparking innovation and bringing fresh perspective to their roles. After receiving an abundance of nominations, the Chamber decided to recognize 12 individuals, including David, who through their passion for community engagement and the betterment of their environment, represent the future leadership of Lancaster County.

David began his career with PCI in 2015 and currently serves as the company’s Implementation and Special Projects Manager. Starting as a management trainee, David has steadily advanced into positions of greater responsibility with the company. Among his accomplishments, he:

Developed a system that was one of the building-block processes or Standard Works, as PCI implemented LEAN manufacturing at the company. He also took the initiative to earn his LEAN Six Sigma Green Belt certification.

Created the company’s first community outreach program, People for Action and Community Engagement (P.A.C.E) in 2017. What started out as a meeting with co-workers to volunteer in local charities, has become a full-fledged 501C charitable organization. Since its inception, P.A.C.E has been active in the Adopt-a-Highway and Toys-for-Tots programs and local Back to School Supply drive. Additionally, David administers PCI’s annual scholarship program.

In 2018, David took on his current role as Manager of Implementation and Special Projects, in charge of large-scale customer implementations. In order to be a more effective manager, David worked in the evenings to achieve his Project Management Professional (PMP) certification. David said, “Earning my PMP was critical to acquiring the skills I needed to navigate the complexities of large-scale implementations, as well as lead my PCI team to guide customers as they transition their business to PCI.”

While at PCI, David has also served as a March of Dimes team captain, has been a Habitat for Humanity volunteer, the President of the Community of Philosophical Thinkers and completed the Leadership Lancaster class of 2019.

Chris Kropac, PCI President said, “we are very proud of David and what he has accomplished. As a key member of our management team, we are thankful for his hard work and dedication to improve our business. Since we relocated our company from Long Island, NY to Fort Mill in 2008, we have been active supporters of the Chamber. Our Executive Vice President, Skip Pawul, served as a past chair for the Chamber. Now, David is playing a significant role in helping us give back to the community and we are excited to see him recognized as one of the bright young talents in Lancaster County.”