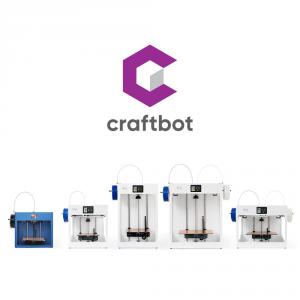 NEW YORK, NEW YORK, USA, October 22, 2020 /EINPresswire.com/ — Craftbot (formerly known as CraftUnique), the developer and manufacturer of award-winning 3D printers and of the Craftbot Flow Generation, welcomed new financial investors Solus Capital Kockázati Tőkealap-kezelő Kft and MIELL Quality Kft to the family, whose combined total investment of $3.3 million will support the company’s continued growth. This is the largest capital increase in Craftbot’s history, demonstrating its proven track record while enhancing its leadership position as a global manufacturer and innovator in the Additive Manufacturing industry.

“Since we launched 5 years ago, we worked with a focus and purpose. We are proud of the growth path we have taken to get to this milestone of welcoming investors,” said Csaba Mákos, Managing Director, Craftbot. “Thanks to the financial support of Solus Capital Kockázati Tőkealap-kezelő Kft and MIELL Quality Kft, we thrive to achieve significant growth and to strengthen our leadership position in the 3D printer industry. We are looking forward to the next 5 years and beyond to build a global brand!”

Since its humble beginnings as a startup in Hungary five years ago, Craftbot has earned a first-class reputation for their manufacturing reliability and easy-to-use desktop 3D printer systems. The company was incepted from the co-founders dissatisfaction with desktop 3D printers in 2014 and their small printing size capabilities. Being software and hardware developers themselves, they set out to create a 3D printer that would be both easy to use and have the capabilities of a more professional machine. Since that day, the multi-award-winning Craftbot 3D printers have set the industry standard for quality and performance for both beginners and advanced users.

The key driver of Craftbot’s success in developing user-friendly, reliable printers is listening and innovating based on customer feedback to continuously improve the value offering. This has led to the Craftbot Plus being awarded by 3D Hubs as the Best Plug N’ Play 3D Printer consecutively for 2016, 2017, and 2018, and to the creation of one of the largest build volume Plug’n’Play printers, the Flow Generation IDEX XL.

The fight against COVID-19 and the high demand of PPE has further highlighted the significance and opportunities for additive manufacturing. 3D printing has improved cost efficiency and simplified processes through this method of rapid local manufacturing. 3D printing simplified and shortened the supply chain as more parts and prototypes are printed locally in a shorter timeframe. Being well positioned with its state-of-the-art complete product line-up at competitive prices, Craftbot has experienced exponential growth with more robust plans for future innovation.

As the company continues to innovate its proprietary hardware and software, they continue to expand throughout North America with strategic partners and resellers, with growth emerging markets such as Australia, Africa, and the Middle East.

“Craftbot is very attractive as it offers state-of-the-art innovative solutions and their success as a developer of 3D printers is evident in their leadership position," said Bálint Botfa, owner, MIELL Quality Kft. “We're extremely proud to align ourselves with such a successful company and to back its growth.”

Given the quick success of the company, the experienced inhouse team and award-winning products, Craftbot brings impact to the 3D printing market. For investment opportunities, visit www.Craftbot.com.