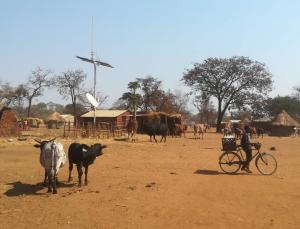 LONDON, UK, July 20, 2021 /EINPresswire.com/ — Africa Mobile Networks Ltd (AMN) has secured an equity investment of US$36 million from a consortium led by Metier, an independent African private equity fund manager with a track record spanning four decades. The consortium includes CDC Group (the UK’s development finance institution and impact investor), DEG (Germany's development finance institution), Proparco (the private sector arm of the French Development Agency) and leading financial institutions and investment managers. The consortium is also acquiring an additional US$3.5 million of existing shares under the transaction and in total will own a significant minority shareholding in AMN.

AMN builds and operates mobile network base stations in partnership with tier-1 licensed mobile network operators such as MTN, Orange and Vodafone to extend their rural coverage. AMN provides a full turnkey NaaS (“Network as a Service”) approach to enable mobile network operators in sub-Saharan Africa to expand their coverage deep into rural areas – with no capital expenditure or operating equipment risk borne by the mobile operators in these remote locations. AMN currently operates circa 2,000 mobile network base stations in rural towns and villages across 10 countries, serving around 7 million people who were previously unconnected and processing 1.2 billion phone calls per annum.

AMN is currently the 5th-largest independent tower company operating in Africa, and growing rapidly. Following a 2020 acquisition of communications technology vendor Range Networks, based in Silicon Valley, California, AMN has also become an OEM and recently deployed its own OpenRAN-based equipment which is capable of offering integrated 2G, 3G, 4G and 5G services from a single radio node.

Michael Darcy, CEO of AMN, said “We are delighted to receive this significant new round of capital to fund the next phase of AMN’s growth and from such a prestigious partner as Metier, with its long track record of strong values and strong financial returns, backed by some of the world’s biggest development finance institutions. Working together with such heavyweight investors enables AMN to take a huge step forward in building many, many tens of thousands of towers across most of sub-Saharan Africa to connect and empower hundreds of millions of Africans who are disenfranchised today”.

Thierry Dalais, Chairman of Metier, said “The AMN leadership team and its stakeholders have created an exceptional business. That we are able to assemble and lead a first class set of investors to bring more telecommunication connectivity to the unconnected at an affordable price, is doing good in our view. The AMN business today is evidence of great entrepreneurship, systems engineering skills, on the ground logistical execution capabilities, supported by the deep investment already made by others in telecommunication network connectivity industries. We wish the AMN leadership and management team continued support from its customers, and to AMN’s now enlarged stakeholder group, good long term returns.”

The Metier investment follows on from the earlier investment of US$25 million from Intelsat, structured as a mix of equity and convertible loan notes. The strategic partnership between AMN and Intelsat is enabling AMN to leverage the power, performance and efficiencies generated by Intelsat’s leading high-throughput satellite network with coverage across the entire African continent.

For more information please visit AMN at www.africamobilenetworks.com or https://www.linkedin.com/company/africa-mobile-networks-ltd