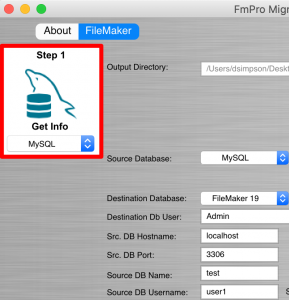 .com Solutions Inc. announces the release of FmPro Migrator 9.37 with MySQL to FileMaker Pro and improvements to Microsoft Access and Visual FoxPro Conversions.

FileMaker Pro developers can use existing MySQL databases as the basis for new or enhanced solutions. Apps previously available only online can now be used offline on mobile devices and desktops.”
— David Simpson

FmPro Migrator uses an automated 3-step process to migrate MySQL tables and data into a local copy of FileMaker Pro running on your desktop. Once completed, the FileMaker Pro database is ready to serve as the starting point for building or enhancing FileMaker Pro solutions.

FmPro Migrator 9.37 also includes the following improvements:
* Visual FoxPro & Other Data Conversions
The compiled Perl xferData.EXE 32bit and 64bit apps have been updated to include additional dll libraries to insure errors don't occur if Perl isn't installed on the computer when xferData.EXE is used. This utility is used with all Visual FoxPro conversions and also other data transfers when holding down the shift key.

* Access to FileMaker Conversion
Updated the AccessDDRExport utility to version 33 in order to fix Error #53.

* Table Consolidation
Enhanced the Relationship_Error_Report.txt with a SQLite delete command, to make it easier to delete defective relationships to allow the automated relationship creation process to continue.
Fixed an issue in which the FmPro Migrator AppleScript Code.zip file wasn't created properly when selecting the File -> Export AppleScript or WinAutomation Scripts menu.

* LiveCode Conversion
Fixed an issue with the saveRecordsAsPDF handler in which a couple of local variables weren't declared (added: tFoundSetFlag,tCurrentRecordPosition). This problem will only show an error if the Variable Checking feature is enabled in the LiveCode IDE – this is the recommended setting to help catch typos.

Fixed an issue with the FileMaker Pro Networking app causing FmPro Migrator to give the error that 2 or more copies of FileMaker are running when performing AppleScript based GUI automation tasks on macOS. These processes may show up as: fmscwpc or node app.js in the process list.

* FileMaker to Access Conversion
Replaced the Access2013.accdc file with with a zipped copy of the Access2016.accdb to prevent security errors when opening the file.

Added a dialog to the Image Export to SQL Database feature and the PDF manual recommending the use of the Microsoft SQL Server Migration Assistant for dealing with transferring of images into Access databases from FileMaker Pro.
Updated the PDF manual to specify using the UTF-8 encoding option when configuring the Advanced Language options of the FileMaker ODBC driver. Since Access databases always use the xferDataPerl.EXE data transfer method – the generated Perl scripts always use SQL_WVARCHAR instead of SQL_VARCHAR to insure that Unicode data is transferred properly.

Pricing and Availability:
For a limited time, as part of the MySQL to FmPro feature introduction, FmPro Migrator (including Developer Edition and Platinum Edition features) is available for a 50% discount ($49.50) and is available immediately.