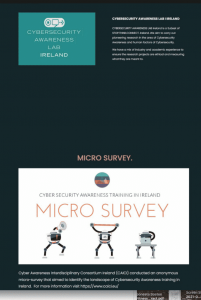 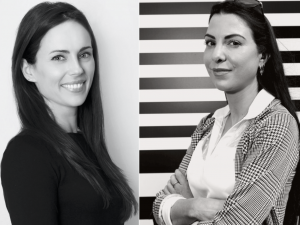 As Cyber Security Awareness Practitioners for years, it was evident to us that Ireland needs more public awareness relating to Cyber security topics to ensure we have a safer digital society.”
— Joanne O'Connor

DUBLIN, IRELAND, October 28, 2021 /EINPresswire.com/ — The Cyber Awareness Interdisciplinary Consortium Ireland (CAICI) launched the STOP. THINK. CONNECT. cybersecurity awareness campaign this
month in Ireland and established the Cybersecurity Awareness Lab Ireland, respectively, to promote the campaign's globally recognized messaging and to inform the discipline of cybersecurity awareness with new and innovative research into the human factors that contribute to cybercrime victimization.

" We are honoured, as CAICI, to be the national curators for the Stop Think Connect Campaign in Ireland. As Cyber Security Awareness Practitioners for several years, it was evident to us that Ireland needs more public awareness relating to Cyber security topics to ensure we have a safer digital society," said CAICI co-founder Joanne O’Connor.

STOP. THINK. CONNECT. | Ireland's contribution to the global cybersecurity awareness effort extends beyond citizen education in online safety, scoping out an ambitious program to cultivate original research in cybersecurity awareness and framing its survey work at national scales, in a way leveraging Ireland's population as a living laboratory to investe the behavioral dimensions of cybercrime victimization – and prevention.

“Our inaugural research entailed surveying the Irish population from all sectors, inc public sector , private sector and students to get a baseline understanding of where our national educational levels lie. 46% of respondents based in Ireland said their workplace did not offer any cybersecurity awareness training – which for us confirms the need for greater awareness campaigns nationally,” Ms. O'Hagan said.

"We are honored to be joined by CAICI in the establishment of the campaign in Ireland – and in working with Ms. O'Connor and Ms. O'Hagan in the development of a very important resource I hope will be emulated in other nations: a cybersecurity awareness research center that addresses human factors at population-level scales," said, Peter Cassidy, co-founder and CEO of the STOP. THINK. CONNECT. Messaging Convention.

The STOP. THINK. CONNECT. slogan, logo and advisory suite were created in 2009 and 2010 by an unprecedented coalition of commercial enterprises, nonprofits and government agencies who recognized the power of a unified cybersecurity awareness messaging campaign compared to an uncountable number of uncoordinated efforts.

Each and every instantiation of the STOP. THINK. CONNECT.™ cybersecurity awareness message assets strengthens the resonance of the global campaign. Dozens of national curator genesis teams are currently evaluating the campaign’s memorandum of cooperation. The Messaging Convention believes its unified messaging archecture will provide maximal coverage and drive the campaign toward ubiquitous, global deployment.